Maria Mann´s Artshop
offers new T-Shirts! Check in and read more about it!
You can also send a MAIL for individual requests. 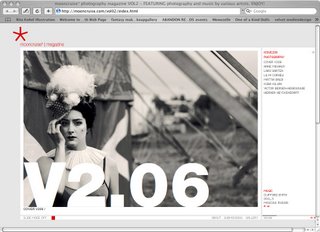 Photo project "CIRCUS" of Maria Mann, Lilya Corneli and Lady Bloody Mary is shown in black/white in the current version Volume 2 of the online-magazine www.mooncruise.com 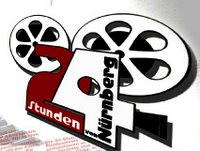 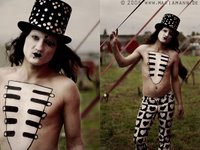 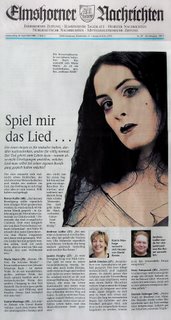 Maria Mann in "Elmshorner Nachrichten" from 28 September 2006.
Article from Melanie Haack about people and the music they want to be played on their funeral.
Have fun!

The FОТОFUSION Group Exhibition of the photography magazine Masterskaya Digital Photo, published by Mediasign and curated by Katya Rykova, moves from Moscow to St. Petersburg, Russia.

Opening is October 27 - 18:00 o´clock at International Guild of Masters, 64 Marata Street.
The exhibition is co-sponsored by HP and Adobe and you can visit it daily from October 28 till November 3.
As last time there are shown early works of Lilya Corneli and works of the collaboration with Maria Mann.

More information about the exhibition HERE!
Who doesn´t understand russian, please contact me.

Another publishing of Maria Mann and Lilya Corneli´s work in the issue 10 of the chinese magazine "Expression".
Have a look at the online version and order a printed version there. 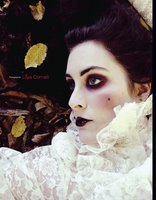 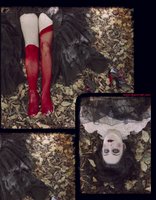 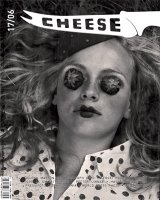 We proudly announce, that the shortfilm "unzweins" of Maria Mann and Marco Reinbold (Headhole Productions) is nominated at the shortmoves-festival in "Diessen am Ammersee" near Munich. The festival will take place from 8-11 November. Ending with the big "film ball". The both film-makers will personally take part at the whole event.
More information and program on the website of the
"Diessener Kurzfilmfestival "!

Visit beautiful Diessen, enjoy the festival and vote for UNZWEINS!!!

Another publishing of Maria Mann and Lilya Corneli´s work in the issue 9 of the chinese magazine "Expression".
Have a look at the online version and order a printed version there.

A series of surreal puppet illustrations is in production and also new primitive/naive works about current events in daily newspapers.
Soon more on here!

"HEADHOLE productions"
is the fusion of the artists
Maria Mann and Marco S. Reinbold aka Lady Bloody Mary.

The ФОТОFUSION Group Exhibition takes place from September 15-29 at the Gallery of Arts in the House of F.I.Shalyapin Museum, Novinsky Boulevard 25, Moscow, Russia.

Lilya Corneli exhibits early works and some of our collaboration.

More information about the exhibition HERE! 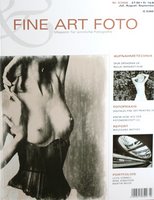 FAIRY TALES PROJECT
of Maria Mann, Lilya Corneli and Maria Kapajeva in the estonian fashion magazine AVENUU
Click on the images for a bigger view!

This photo is part of the photo project "FAIRY TALES".
It is a collaboration of Maria Mann, Lilya Corneli and Maria Kapajeva.
The hats are from the great designer Fiona Bennett (Berlin).

Lilya Corneli and Maria Kapajeva did the photographing and Lilya the post processing.

Maria Mann, beside being part of the images themselves, managed and created the Make Up, some Accessoires and most of the Costumes.

See more of the series by clicking on the IMAGE!

MARIA MANN´s ARTSHOP opens its "doors" today!
Welcome to everybody!!!

The sortiment of the shop will constantly expand, so stop by from time to time for further development.

Another publication of Maria Mann and Lilya Corneli in the august-issue of the italian photo-magazine IL FOTOGRAFO
By clicking on the cover-image you can view the whole article. 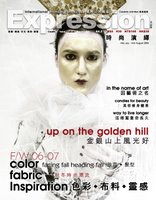 Check out the online-version by clicking on the image to the left!

Furthermore you can order a printed version there.
Eingestellt von Maria Mann um 9:46 AM Keine Kommentare: 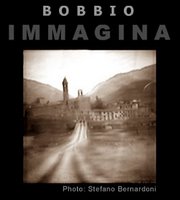 Lilya and I are taking part in an exhibition of photographic works by artists from all over the world in Bobbio, Italy, July 16 - 30, 2006.
Klick on the left image for more information and to view our two photo-series.


*** Check out: Photo-Gallery with Lilya Corneli in 3 pages!

Photo Series "Wind and Rain" with Lilya Corneli. Soon more of it here! 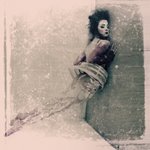 Awarded for "photo of the week" and "photo of the day" at the International Photographers Community Photo Points
Look at it HERE!
(Collaboration work with www.lilyacorneli.com)
Eingestellt von Maria Mann um 5:34 PM Keine Kommentare:

During this long time of silence it wasn´t silent at all.
Whole April until now, Lady Bloody Mary and I were working on the Artwork of the upcoming album "unzweins".
This album soon will be released with an Artwork portfolio, a great design of CD and booklet and a filmlet which introduces a series of short films.
Here you can watch the Trailer!

Soon will come more information and images, so keep watching, get my newsletter or Podcast with RSS Feed and XML (the buttons on the right side) - an information service which comes directly to your computer!

March 2006
My and Lilya Corneli´s first cover on a russian photo magazine with portfolio on CD-Rom and interview inside! 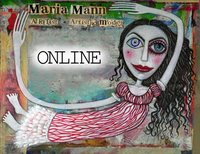 17 March 2006
After a long time of waiting and endless patience, the first version of my Website "www.mariamann.de" is FINALLY online!
I want to thank my Webmaster Conductor Mary , who realized and enriched my ideas so fast and effective.
It was a pleasure to work together on this.

February 2006
End of 6th Semester at the University for Applied Sciences, "HAW Gestaltung", Hamburg and one month "holidays".

December 2005
Photo-Series in the mountains of Bavaria (Berchtesgaden/Neuhäusl) 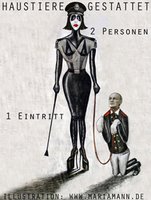 03 September 2005
Model at the Fetish-event "WHITE LOUNGE".
I created a special "MUMMY" Outfit and MakeUp for me and my friend Jenny.

September 2005
Start of a new and very multi-face(tte)d, artistically fundamental collaboration with the Artist Conductor Mary (Berlin).
A creative exchange of work in a symbiotic relation.
Im part and left hand for his audiovisual art-project "Lady Bloody Mary" in complex ways: As a Performer, Costume- Stage- and MakeUp-Designer, Photographer, Model, Designer, Illustrator,
Film-Maker and much more.
www.ladybloodymary.com


June 2005
Passed „Intermediate Examination“ of my Illustration study at the University for Applied Sciences, "HAW Gestaltung", Hamburg
with "very good" :-)